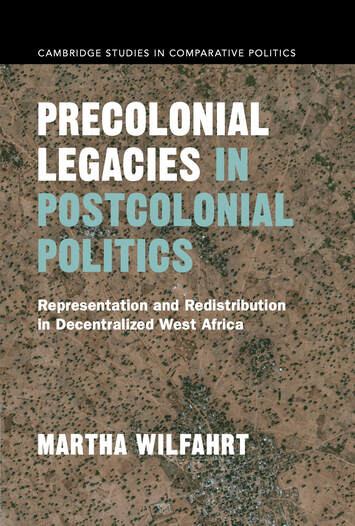 Precolonial Legacies in Postcolonial Politics looks at the historical legacy of precolonial statehood on the outcomes Africa's recent democratic decentralization reforms. I identify emerging subnational variation in the nature of local representation and redistribution within one country, the West African state of Senegal to advance the argument that relative local government performance corresponds to precolonial political geography. To explain this, I put forward a theory of institutional congruence, which argues that it is the relative overlap between the formal institutional space that was created by decentralization reforms and informal social institutions drive patterns of local public goods delivery and perceptions of local government representation. I argue that precolonial states left as an inheritance deeply held identities embedded in dense cross-village social ties among local elites, such as local elected official, notables or village chiefs. High spatial overlap between the formal institutional space of the local state and the mutually-reinforcing presence of local identities and strong cross-village social relations  alters the incentives of local politicians, reorienting them away from individual opportunism and towards group goals.  In contrast, areas that were acephalous prior to colonization perform worse, reflecting splintered local elite social networks and weak or non-existent identities. Consequently, capturing the local government becomes a zero-sum game.

I build this argument on a range of original data, including a georeferenced village-level public goods provision from 1880-the present, interview data collected from hundreds of local elites in over 60 local governments across rural Senegal, archival research and in-depth case studies of three local governments collected in Winter 2017.  Precolonial statehood matters for how local governments are delivering basic public goods today, but by unpacking the politics of public goods provision to look at where and why public goods were spatially and temporally invested by the colonial and post-colonial regimes, I find that this effect only follows the exogenous institutional shock that came with democratic decentralization in 1996, whereby local elected councils were transferred authority over basic public goods investments among other things.  Qualitative data and case studies allow me to identify the dual mechanisms of salient local identities embedded within denser social networks that generate differences in institutional congruence.

I am excited to participate in Cambridge's pilot open access program - an open access electronic copy of the book is available here.

Winner of the 2022 Allan Sharlin Memorial Book Prize from the Social Science History Association; Honorable Mention for the 2022 Giovanni Sartori Best Book Award from the Qualitative and Multi-Method Research Section

Tropical Subjects: Ethnographies of Experimentation
My second, solo-authored book project  responds to the rise of field experimentation over the past decade. Although experimental researchers have carefully evaluated potential ethical dangers and best-practices of their work, I am interested in studying field experiments from a different perspective: that of participants themselves. I will evaluate how participants understand and shape project trajectory by conducting a series of ‘ethnographies’ of experiment. In so doing, I seek to answer three, interrelated questions: how do respondents understand randomization and their assigned treatments? Do they seek to be ‘good’ participants? And, finally, how do field experiments interact with community-level politics, particularly in cases when valuable goods are distributed? In addition to contributing to methodological debates, this project asks us to reflect on how we ourselves distribute scarce resources – in this case information, training, goods, etc. – and with what impact on participants’ political lives.